In November 2017, the U.S. government released its first ever Global Water Strategy – to our knowledge also the first of its kind globally. The opening page cites President Trump claiming that ‘[w]ater may be the most important issue we face for the next generation’. This priority may surprise observers of the current U.S. administration.

The relevance of global water security

Global access to WASH (water, sanitation and hygiene), enshrined in Sustainable Development Goal (SDG) 6, is critical for global welfare. The Global Water Strategy recognizes this by underlining that “safe water and sanitation are fundamental to solving challenges to human health, economic development, and peace and security”. Unfortunately, the Strategy makes no mention of the SDGs (or other international policy processes), most likely for domestic political reasons. Yet it indirectly strengthens the case for U.S. investment into pursuing such processes by demonstrating the relevance of global water security for U.S. national security. The Global Water Strategy thus implicitly links SDG 6 with even a narrow interpretation of U.S. self-interest. It thereby echoes repeated warnings from the U.S. security community, which emphasized that global water crises are likely to have security implications for the U.S. – a topic whose worldwide resonance was recently explored by the Global High-Level Panel on Water and Peace in its report A Matter of Survival.

The Global Water Strategy in detail

In detail, the Strategy outlines four interrelated objectives which “should be viewed as complementary pillars that together contribute to improving water security at the national and regional level.”

These objectives are accompanied by a short section on the U.S. government’s strategic approach which describes tools and approaches for achieving the four Strategy objectives. These include:

Subsequently, the Strategy identifies 13 high priority countries and regions based on the Water for the World Act of 2014. These include, amongst others, Afghanistan, Haiti, the West Bank/Gaza, Jordan as well as a number of African countries. These countries were reportedly selected based on their level of need, willingness and capability to work with U.S. partners, opportunities to leverage U.S. support with the private sector and other donor partners and the likelihood that aid will improve health, education and economic opportunities available to women and girls.

The document finally summarizes the contributions of 16 different U.S. government agencies and departments (see also the graphic below). The Department of State, for instance, is expected to “provide a platform […] for coordinating interagency efforts on water, sanitation, and hygiene issues internationally, and ensure that U.S. departments and agencies have timely and authoritative information on emerging trends and threats.” NASA will continue to provide satellite data to track environmental change, engage in remote sensing monitoring of inland water bodies and support capacity development activities. The most detailed contribution is outlined for the U.S. Agency for International Development (USAID), which also developed its own agency-specific strategy.

Unfortunately, the Strategy misses the chance to outline potential synergies (as well as possible trade-offs) between these different agencies’ contributions towards reaching global water resources security.

The Global Water Strategy makes a strong and coherent case for the importance of global water security, usefully pushing the boundaries of the rather WASH-focused Water for the World Act to elevate questions of governance and transboundary cooperation. Building taps and sanitation facilities is certainly important, but it is a task that many actors can undertake. Far fewer actors are able to tackle the underlying, deeply political and societal questions of improving water governance to ensure that water supply and wastewater disposal activities are also managed in the long-term. It is at that strategic level that the U.S. government will often be able to add most value. In this respect, the Strategy’s attempt to align the activities of around 20 different federal agencies under one joint, strategic approach is particularly useful, and arguably worthy of emulation elsewhere.

Whether the U.S. government will collectively be able to live up to the aspiration of strategic vision and coherence is, of course, a different question. On the plus side, the Strategy contains numerous agency implementation plans (even though these were not required by the Water for the World Act) and has a coordination mechanism in place through the Interagency Water Working Group. This level of cooperation is not only progress for the U.S. government, but also a benchmark that most other governments have not yet achieved.

Yet there are aspects of the Strategy that undermine the strategic vision it sets out.  As several experts noted in a set of comments on the New Security Beat, the Strategy studiously avoids references to climate change, a key driver of water challenges in many regions, and it lacks information on the methods for prioritization and funding. Although the Strategy’s Annex B mentions a number of criteria for priority country selection, there is no transparency as to why certain countries are included (e.g. why Indonesia but not Pakistan?). And whereas there might be good reasons for these choices (as well as for not disclosing them), a presumption of strategic decision-making is hard to square with the degree of aid volatility that the country plans betray.

While water security requires consistent and long-term engagement, the President’s funding requests differ markedly from previous allocations. Not only has overall funding declined, despite the President’s rhetorical acknowledgement of water’s significance, its cross-country distribution is also changing in less than intuitive ways. For example, whereas Indonesia’s allocation is slated to rise modestly from 6.1 to 7 million USD from financial years 2017 to 2018, Afghanistan’s is slashed from 10 to 5.7 million, Ethiopia’s from 15.3 to 6.3 million and Liberia’s from 12.9 to 2.5 million. It is hard to avoid the suspicion that politics, e.g. a lack of interest in Africa, may have trumped sound policy. Such politics are all the more questionable because greater water security in host countries is an important lever for better managing migration.

Presidential politics aside, the country plans remain very much focused on WASH activities and rarely reflect the holistic and strategic approach embraced in the Strategy’s introductory vision. In all likelihood this reflects a path dependency of USAID’s earlier engagement. There are very good reasons for focusing on WASH activities (they are very important for beneficiaries), but there are also not so good ones: while easy to define, measure and justify and hence good for evaluations and domestic political consumption, they may not make the most of the U.S. government’s potential to influence recipient countries for more long-term changes in the water sector.

Yet, all these criticisms aside, the Global Water Strategy is a commendable achievement. At the very least, it sets out a sensible, coherent and shared vision for the entire U.S government. This is all the more important in the current context of a partly dysfunctional administration because a presidentially endorsed strategy empowers individual officials to request resources and support for a globally important challenge. Moreover, the existence of an Interagency Working Group at the very least facilitates systematic information exchange and may, in time and under the right circumstances, also enable a strategic, all-of-government approach to implementation.

The elaboration of a U.S. Government Global Water Strategy thus raises the question of whether a similar document and approach would be sensible for other countries particularly active in the issue area, not least the German government. Berlin has arguably already laid the groundwork through last year’s publication of a global water strategy of sorts, though one underwritten only by a single ministry. That strategy’s focus on the development community could usefully be complemented by a strategy backed by the entire cabinet and the establishment of cross-ministerial coordination mechanisms.

To its credit, America has done it first, but Washington’s current political leadership ensures that it should be possible to do it better. As negotiations over government formation in Germany grind on, perhaps this is an aspiration that potential government partners can share?

The “Most Important Issue We Face”: New U.S. Global Strategy for Water Emphasizes Health and Security 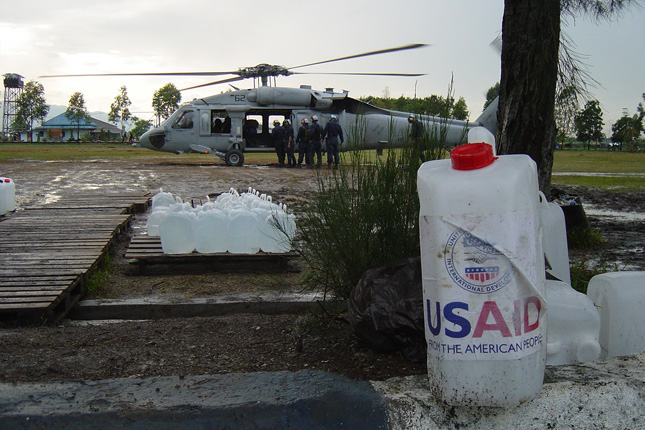 Despite general political commitment to cooperation, water policies in Central Asia are largely driven by uncoordinated and partly contradicting national strategies. By raising awareness of these costs of inaction, and by setting out a variety of pathways towards eliminating them in the future, the present report seeks to encourage and support Central Asian policy-makers in strengthening regional water cooperation and improved water governance.

The Divided States of America

The United States is at a critical juncture in its future climate policy directions. Biden’s electoral victory and the appointment of former Secretary of State John Kerry as special envoy present opportunities, yet America remains deeply divided. By engaging in transatlantic climate cooperation not only with allies, but also sceptical parts of society, Europe can help drive the climate conversation forward.