The Mekong River Basin covers large parts of Southeast Asia, and is shared by six Asian countries. The river is an important source of life for the people living in the basin in terms of both agriculture and fisheries. Managing the shared resources of the Mekong has, however, been difficult. The more recent usage of the Mekong as a source of hydropower and the building of large-scale dams has, in particular, created disagreements and disputes among several riparian states.

As a changing climate is likely to intensify floods and other water-related challenges in many international river basins – including the Mekong – it is important to strengthen capacities to manage the risks of climate change, thus safeguarding livelihoods and preventing conflict.

In a report launched at the 2016 World Water Week in Stockholm, adelphi argues that effective adaptation in transboundary river basins could benefit from closer integration of water and climate policy instruments.

The report Water and Climate Diplomacy outlines different water governance instruments that are already employed by river basin managers and policy makers to support climate change adaptation, but also shows that a number of deficiencies still exist. The report argues that climate policy instruments could be used to overcome existing shortcomings, strengthen adaptive responses, and help to avoid disputes.

In many river basins around the world, much has been done to improve water management and to address the impacts of climate change. In the Lower Mekong River Basin, an important source of livelihood for the roughly 66 million basin inhabitants, four of the six riparian countries have established the Mekong River Commission (MRC). The river commission aims to ensure the sustainable management of the river basin resources and to coordinate various national activities along the river.

Under these conditions, adaptation to climate change is crucial to ensure livelihoods and political stability. The MRC has been quite active in addressing the challenge of climate change. In 2009, the organisation has adopted and subsequently implemented the Climate Change Adaptation Initiative (CCAI). Amongst other things the program realised research activities that contributed to better understand the impacts of a changing climate and implemented various capacity building activities. Additionally, MRC’s Flood Management and Mitigation Program helped improve the technical and social adaptive capacities.

However, the two upstream countries Myanmar and China are not members to the MRC which complicates adaptation to the impacts of climate change. China (as well as other Mekong riparians like Laos) is in the process of building several dams which, in addition to expected changes from climate change, are likely to further alter the river’s flow regime.

Considering the enormous funding cuts by international donors for the Mekong River Commission, international climate finance mechanisms such as the recently established Green Climate Fund could provide an additional source of funding for MRC activities to address climate change. As such, the MRC could explore possibilities to access this funding and become accredited to existing climate change funding mechanisms.

This and other examples outlined in the report demonstrate that “climate diplomacy” tools – such as climate funding or national adaptation planning – can be employed to strengthen adaptive responses to climate change at the transboundary river basin level.

First, adaptation to climate change has, to date, mainly been an issue of national concern. At the national level, several climate policy instruments, such as vulnerability assessments or national adaptation plans, are already commonly used. However, national adaptation activities can create (unintended) negative effects for other riparians. If, for example, an upstream country increasingly dams a river for hydropower, downstream neighbors can be affected by changes in flow regime.

Second, stronger coordination between riparians over one international river basin could provide benefits. For instance, often flood protection measures are easier or more cost effectively realised in a country other than the one affected by floods (usually a more upstream riparian).

In both cases, a stronger integration of (national) adaptation tools and transboundary water activities could support adaptation in international river basins for the benefit of socioeconomic development and security.

Third, adaptation to a changing climate will in many cases require additional funding. In recent years, the international community has therefore established different funds for climate change mitigation and adaptation such as the Green Climate Fund. While most of these funds to date focus on national adaptation projects, they could be used to finance activities in transboundary river basins.

How to support adaptation in international basins?

So what can international actors do to support adaptation to impacts of climate change in transboundary river basins and strengthen the integration of water and climate policy? The report identifies a number of concrete steps that regional and international actors can take, including engagement to establish new river basin institutions (or strengthening existing ones), facilitate access to climate change funds or increasing links between regional and national levels of river basin management. These activities require stronger support from the international community and climate and water policy actors in particular.

Get the latest publications, news and videos on climate diplomacy straight to your inbox by subscribing to our quarterly newsletter.

Calming the Waters: Why We Need to Better Integrate Climate and Water Policy 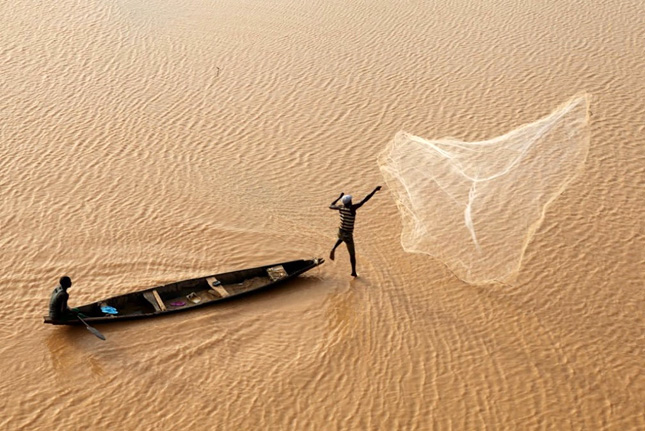 The Nile River is shared by 11 countries, for which it is vital for food and energy production, freshwater, and as a means of transportation. Sharing the resources of the Nile has, however, been politically difficult. Recently, the construction of the Grand Ethiopian Renaissance Dam has caused a major dispute with downstream Egypt which fears the dam will affect water flow in its own territory.

Many transboundary water basins around the world are facing climate-related challenges that will intensify in the decades to come. Successful adaptation will be an important precondition for ensuring sustainable development and political stability in these basins. At the same time, stability and cooperation are preconditions for successful adaptation. How can riparians best achieve these interrelated objectives? And with the international community seeking to support both processes, how can water and climate diplomacy strengthen each other?

Divided we stand. Together we win. Climate diplomacy and Covid-19

Since the outbreak of the COVID-19 pandemic, numerous parallels have been drawn between this health crisis and the climate crisis. Science plays an important role in advising decision makers on how to ensure sustainable crisis management and a precautionary approach to avoid harmful repercussions, particularly where we do not yet know all the consequences of our actions. [...]

Decarbonisation won’t come as fast as the pandemic. But if fossil fuel exporters are not prepared for it, they will face an enduring crisis. The EU can help.

Don’t let the blue skies fool you: in Brazil, the pandemic is bad news for climate and environment

Stories of clear skies and wildlife conquering urban areas might provide much needed comfort during these uncertain times as the health crisis unfolds. But in Brazil, where climate and environmental issues already lack attention and resources, the pandemic underscores the next crisis.

Solutions to the current COVID-19 crisis need to be aligned to those of the climate crisis for a global transformation towards more sustainability, resilience, equity, and justice. Climate diplomacy has the tools to achieve these objectives simultaneously.