On a visit at short notice to Germany, Russian President Vladimir Putin has met with German Chancellor Angela Merkel to discuss a range of bilateral and international issues, including the conflicts in Syria and Ukraine, and the future of the controversial gas pipeline project Nord Stream 2. The pair met for the second time within just three months to talk about the project.

“Ukraine has to play a role also with Nord Stream 2 in place,” Merkel said ahead of their talks at the German government’s guest house in Meseberg near Berlin, reiterating a demand already made in April. Although the German chancellor sought to dampen expectations before Putin’s visit, saying “no concrete outcome” was in sight, she stressed that “controversial issues can only be solved through dialogue.” Nord Stream 2, which will run parallel to another natural gas pipeline from Russia to Germany that has started operation in 2011, has caused much dispute within Europe and also drew sharp criticism from the US government. The government of financially stricken Ukraine fears its transit charges, currently amounting to about 3 billion dollars annually, could be lost after the new pipeline has opened. It also criticised that Germany is set to intensify economic ties with Russia, which stands accused of having annexed Ukraine’s Crimea peninsula in the Black Sea and of keeping the armed conflict in eastern Ukraine running. [Find out more on Nord Stream 2 in this CLEW factsheet]

On his first bilateral working trip to Germany since 2013, the Russian president addressed Merkel’s wish to find a solution for the pipeline, saying “I know the position of the chancellor very well. But I want to emphasise that this transit through the Ukrainw, a traditional transit route, must meet economic requirements.” Putin said that the pipeline does not exclude the possibility of continued gas transit through the Ukraine and that it is a “purely economic project,” a formulation used by Merkel in the past. In April 2018, however, she acknowledged concerns by the Ukrainian government and said the pipeline “is not just an economic project, but, of course, political factors must also be taken into account.”

In Meseberg, Putin especially emphasised that Russia had always been and would continue to be a reliable partner in energy trade. “Last year, we were able to celebrate 50 years of natural gas deliveries from Russia to Europe,” Putin said, adding that “in all those years, Russia provided a stable energy supply.” Putin said Nord Stream 2 would “complete” the European gas supply infrastructure, as the pipeline was not only meant for German buyers but also to its EU neighbours. The project will minimise transit risks and ensure that Europe’s growing gas demand will be satisfied, he added.

Apart from Ukraine, other eastern and northern European countries, especially Poland and Denmark, are opposed to the new pipeline. To avoid construction in its territorial waters, Denmark’s parliament created a new legal basis that allows the government to deny licenses for pipeline construction on its maritime territory on grounds of security concerns, rather than only due environmental considerations. Poland is wary that the project will increase Europe’s energy dependence on Russia and fears that it will lose political influence on energy questions if its territory is no longer needed for Western Europe’s gas supply.

“Nord Stream 2 has a very high political cost attached to it,” Kirsten Westphal, expert on international energy policy at the German Institute for International and Security Policy (SWP), told the Clean Energy Wire. Westphal stressed that while the pipeline will physically connect Russia with Germany, it is a joint project by companies from several European countries. Apart from Russia’s Gazprom and German companies Uniper and Wintershall, British-Dutch company Royal Dutch Shell, French energy provider Engie and OMV from Austria all are invested in Nord Stream 2.

“The assessment by all European companies involved in Nord Stream 2 is that Europe is headed for a natural gas supply gap and the German government shares this opinion,” the energy policy researcher said. Following a series of minor earthquakes that resulted from natural gas extraction, gas production in the Netherlands will be drastically reduced in the coming years, dealing a blow to Western Europe’s domestic gas supply.

Production at Europe’s biggest gas field near Groningen will be halved by 2022 and cease entirely by 2030, Dutch prime minister Mark Rutte said in March. “This has made the need for alternative import sources much more urgent, even though demand is more or less stable,” Westphal said. This could either be done with shipped liquefied natural gas (LNG) from the Middle East and the US - or with gas coming through pipelines from Russia, at a significantly cheaper price.

However, Westphal said the project comes at a geopolitically difficult time and is likely to cause Germany difficulties in garnering support among fellow EU members for other political endeavours. “It doesn’t let Germany appear as a supporter of the Energy Union, which creates a real dilemma for the integrated energy and climate policy in Europe,” Westphal says. Creating an integrated European power market is a key aim for the German government in this regard, but given its unperturbed approach to Nord Stream 2, “the integrated power market will likely meet more resistance from Eastern European countries,” she said.

Besides Germany’s European neighbours, the US government has repeatedly lashed out against the German-Russian energy link in the Baltic Sea. In early July, President Donald Trump said on Twitter that Germany is “totally controlled” by Russia due to its reliance on Russia’s gas resources, which in 2015 accounted for roughly a third of its total gas imports. The US has made clear that it rather supply its own gas to Europe through LNG shipping terminals than watching Russia expanding its share in the EU.

In 2017, then German foreign minister Sigmar Gabriel sharply criticized a threat of sanctions from the White House on companies that take part in the pipeline project. So far, president Trump has not enacted any sanctions. The German Committee on Eastern European Economic Relations said the threats from across the Atlantic amounted to a “violation of our sovereignty” and called on the government to defy orders from the US. But the business lobby is wary that companies could withdraw from the project, as it happened in Iran after Trump announced the US will withdraw from the nuclear deal and imposed sanctions on firms active there, which could mean the end of Nord Stream 2, should the US follow through with its threat. 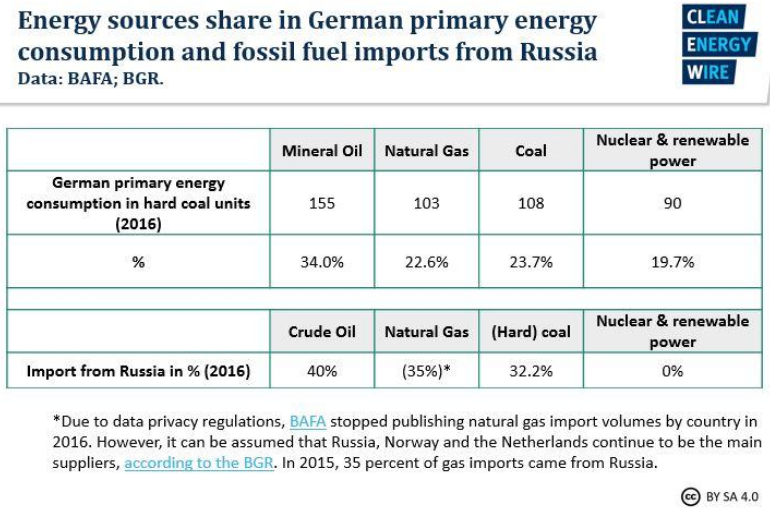 Also within Germany, critics of the project abound. In an unusual alliance, politicians from the Green Party and from Merkel’s conservative CDU in early 2018 jointly criticised the pipeline, saying it would “contradict solidarity with our neighbours and a common European energy policy”. They warned that Nord Stream 2 has the potential to split the EU, calling on the junior government coalition partner SPD to reconsider its support. However, SPD politician Matthias Platzeck, head of the bilateral association German-Russian Forum, reiterated its support shortly before Putin’s visit. “There’s no doubt that building this pipeline is in Germany’s and Europe’s interest,” Platzeck told news agency Dow Jones.

Harald Hecking, managing director of energy research and consultancy organisation ewi Energy Research & Scenarios, said  “Nord Stream 2 makes a lot of sense for Germany and the EU from an energy-economical point of view. Coal use will significantly decrease due to climate targets, and nuclear energy will not grow in the EU,” he told the Clean Energy Wire. Given that the share of coal and nuclear energy is going to decrease substantially in the coming years, the pipeline could help bring additional lower-cost natural gas into the north-western European market and intensify competition especially with LNG, says Hecking. “LNG is decisive for setting the European price,” he said, adding that more gas from Russia through Nord Stream 2 would bring a significant price reduction.

Also, a modern pipeline would help reduce methane leakage that occurs due to old infrastructure in Ukraine – and allow to set up an infrastructure for carbon-neutral gas supply in the future, Hecking argued. Natural gas will be needed for a cost-efficient and supply secure energy transition in similar volumes to today’s at least until 2040, “especially to replace the use of more CO₂-intensive fuels coal and oil,” he said. But “we cannot burn fossil gas in 2050, should we want to reach the goal of reducing greenhouse gas emissions by 95 percent. For Nord Stream 2, this means that it must increasingly supply climate-neutral gas from 2040 onwards.”

In spite of the ongoing criticism, the pipeline’s construction has started and continues unabated. The consortium has applied for a new license for a different route after the Danish government rejected the initial plan. The new route that will possibly run along the north-western coast of the Swedish island Bornholm would be about 40 kilometres longer than the initial route, but given the pipeline’s total length of 1,200 kilometres, the detour would not alter the total length substantially.

From Riches to Rags? – Stranded Assets and the Governance Implications for the Fossil Fuel Sector

"From Riches to Rags?" looks into the subject of stranded assets in the fossil fuel sector. Stranded assets are assets that lose value, or generate new liabilities, before they reach the end of their (planned) economic life. In this paper, assets primarily refer to fossil fuel resources (oil, gas and coal) that need to stay in the ground because otherwise the 2-degree target specified in the Paris Agreement would be jeopardised.

How climate services can help mitigate crises and conflict

Extreme weather events such as droughts and floods are expected to become more severe under future climate conditions. This implies a concern for policymakers in national and international security.